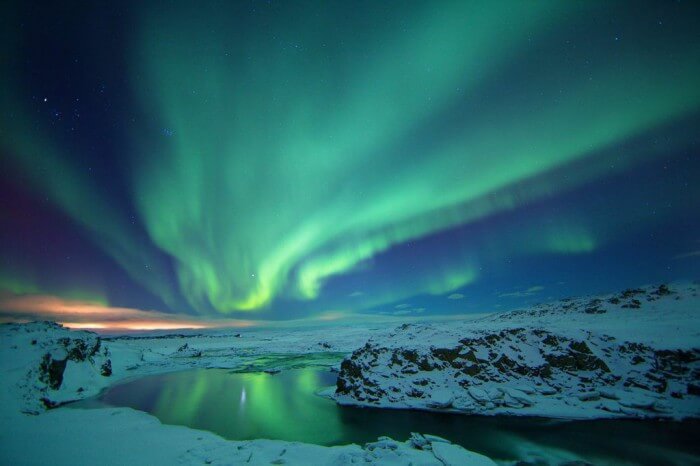 Iceland is known to be a cold country with an average temperature range of 4 – 10 °C. Although it is known to change quickly, and often in a day. This is the biggest challenge that people have to deal with.

Iceland’s travel seasons are broken down into four separate categories. There is the high season, the low season, and the shoulder season off-season.

Why visit Iceland in October?

October is one of the lowest busy months in Iceland. The rush of the summer is over and the festivities of early winter are yet to set in. Visit Iceland in October and you will discover many advantages.

What to See in Iceland in October?

The Northern Lights in Iceland in October

The Aurora Borealis can only be seen in darkness when the sky is clear. On a clear October night, visitors have unparalleled opportunities to catch the lights.

Northern Lights tours from Reykjavík can be conducted on a minibus or a super jeep. Bus tours are more affordable, super jeeps can take you to less reachable places— down dusty trails and over rivers, ensuring less light pollution.

You can also spot the Northern Lights yourself in a rental car, looking out spots with little cloud cover.

In October, you can enjoy hiking and taking super jeeps into the highland regions.

‘Valley of Thor’ can be visited and hiked in October, and you can see its mesmerizing land in its autumnal colors.

You can enjoy Boat tours of Jökulsárlón glacier lagoon in October.

Jökulsárlón is an enormous lake, which is filled with icebergs that have calved from a distant glacier tongue.

For a slightly more costly, but more intimate experience, you can take a zodiac tour in an inflatable boat with a detachable engine. You also find seals in this area.

In October most migratory animals are now on their way out of the country; this includes the Humpback and the puffins that nest on its cliffs.

Over twenty species of whales, dolphins, and porpoises live off of Iceland’s coasts, you can see all of them well into October, including orcas, blue whales, and beaked whales.

The destination for Whale watching tour is Skjálfandi Bay and Snæfellsnes Peninsula. In Skjálfandi Bay you get a chance to see an incredible wealth of life.

Horse-Riding in Iceland in October

Riding an Icelandic horse is an ultimate Icelandic experience.

Horse-riding is very popular amongst Icelanders and visitors, and there are many ways to enjoy the activity in October. From Reykjavík, you could take a tour of overdramatic lava fields, imagining the experiences of Vikings in the settlement age. Horse riding is also available in Reykjadalur Valley.

Glacier Tours in Iceland in October

Iceland’s glaciers are one of the most popular attractions. Glaciers cover 10% of the country, and a variety of tours run atop them in October.

A good knowledgeable, well-qualified guide will teach you about the geological and volcanic history of this island during your time together.

Sólheimajokull is one of the most popular glaciers for hiking and includes some of the features of the South Coast such as the famous, majestic Skógafoss and Seljalandsfoss waterfalls.

Snorkeling and Diving in Iceland in October

Snorkeling and Diving are conducted in Silfra, a fissure in the North American and Eurasian tectonic plates in Þingvellir National Park and are the most popular activities in Iceland.

Festivals in Iceland in October

Iceland loves its festivals. People flock from around the world for events like Airwaves and Secret cosmic time, and these events expand with every passing year.

The (RIFF) is the largest film festival in the country, which begins on September 26 and ends on October 6.

Concerts, meetings, and exhibitions crop up across the town, permitting industry professionals to build both their knowledge and network.

In October various concerts are held around the country.

From local to big names such as the Swedish pop star Zara Larsson.

What to know about Iceland before visiting in October?

It is important to be aware of what to expect from the country, before coming to Iceland in October, so that you know what you pack and can make informed decisions.

The temperature in October in Reykjavík is 4.8° Celsius (41° Fahrenheit). The average rainfall is 77 mm (around 3 inches. So, you should bring your waterproof pants, your winterwear, and your windproof jacket, and also sturdy hiking shoes.

Since the temperature is very low there is a higher probability of heavy rain, strong winds, dense fog, snowfall, and ice, many travelers to Iceland in October choose to rent a car.

Accidents on Iceland roads are common during this month because visitors are not used to driving in such hazardous conditions.

If you book a car or choose to rent a car then make sure it should be a 4×4 or super jeep, and before starting your journey don’t forget to check the weather website so that you should be aware of the potential conditions.